Sometimes when you travel, it’s not about the sights you see, but the people you cross paths with…

Before I moved to Cape Town for work in 2015, I was warned by many about the beggars living on the streets there. Frankly, it’s not much different than New York City, just a bit more condensed. The city was small enough that my friends and I saw a lot of the same faces begging every day. They started to become a normal part of our day, except for one woman who made it her mission to stand out.

This woman ended up making a big impression on me. She was a tall, very thin woman who wore dirty, worn out clothing and looked to be much older than she probably was. She walked around all the busy streets with a sign that read:

IN DIRE NEED OF TEN RAND

This is what made her stand out. We all thought it was so weird, but it caught our attention and we laughed about it whenever she passed us. She never bothered us though. She stayed quiet and didn’t approach people. They approached her because they were drawn in by her sign.

On the day I left Cape Town, we were heading off to Camps Bay for one last stop at the beach. As we stood outside the hostel waiting for our Uber, there she was standing on the sidewalk. It was one of her favorite spots because it was a busy area. I decided to take a picture of her because how could I not document this woman? She was a striking human being. 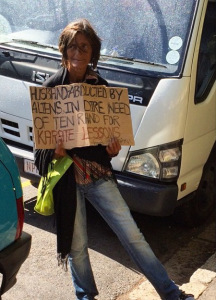 Many people would give her money for a picture or just because they thought she was interesting. We were never sure what she really needed the money for. Food? Drugs? Was she completely homeless or did she have somewhere to stay? I never found out anything about her until after I returned home to the U.S.

So about six months later, I learned that her name is Allison and she is battling a heroin addiction. I came across a photo contest by @instagram_sa which was featuring women of South Africa. The contest winner had won with a picture she took of Allison and an inspiring caption about her:

“’It’s the cold turkey that’s the hardest.’ I know Allison from Cape Town’s streets and often stop to have a chat when I see her. I am always struck by her soulful green eyes. She has been battling a heroin addiction for years. She is brutally honest about her addiction and has a deep desire to come clean but needs long-term help and without family and a support system she has found it impossible. So Allison lives on the streets begging for her next fix. This I know for sure – the mentality and behavior of addicts seem wholly irrational until you understand that they are completely powerless over their addiction and unless they have structured help, they have no hope.”.

I have so many wonderful stories from my time in Cape Town. So far, it’s been the best part of my life. But, with all great stories, you may find sad ones to go along with it. This woman Allison and many others in Cape Town, and all over the world for that matter, have a struggle that hopefully many of us don’t relate to, but should have sympathy for. Not everyone has a support system and sadly, they lose the daily battle.

Allison was featured in one of my favorite music videos, “Don’t Leave Me” by Freshlyground. The video showcases the beautiful diversity of Cape Town and it’s a great reminder of how everyone has a different and unique story to tell. Watch: https://www.youtube.com/watch?v=HKzoVTjuYtI